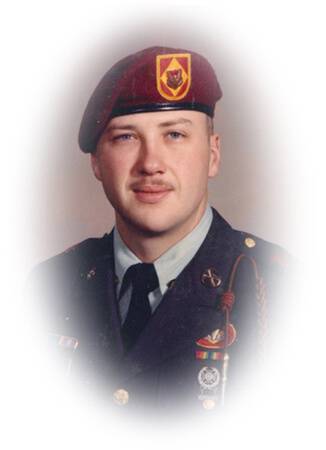 Funeral services for John Utz will be held at 2:00 p.m. on Thursday, June 12, 2008 at the Immanuel Evangelical Lutheran Church east of Clarion with Pastor Marvin Lorenz officiating.  Burial will take place at Graceland Cemetery in Rowan.

Visitation for John Utz will be held from 6:00 until 8:00 p.m. on Wednesday, June 11, 2008 at the Immanuel Evangelical Lutheran Church east of Clarion and continue one hour prior to services at the church on Thursday.

James Claude Utz son of James and Joan (Wolfers) Utz was born on September 12, 1962 in Charles City, Iowa. He was raised and educated in the Rowan – Belmond area, graduating from Belmond High School in 1980. While in high school John performed in several plays and musicals receiving many standing ovations.

After high school, John majored in music at Drake University. He then enlisted in the Army to serve his country from Airborne to attaining the rank of Staff Sergeant. He was also a DJ and talk show host on the base in Germany. After 8 years of service and 11 years in Germany, he returned to the Des Moines area and later moved back to Rowan.

John was a member of the Immanuel Evangelical Lutheran Church, and was Wright County Republican Chairman.

He was preceded in death by his father, James Dwight Utz.