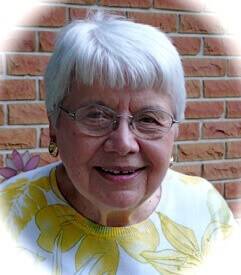 Betty Jane McClenahan, 94, passed away Saturday, October 12, at Lake Manor in Mendota Heights, Minnesota. Before she and her husband, Guy, moved to the Twin Cities in March, 2015, to be near their children, they had been residents of Belmond, Iowa, for 64 years.

A Celebration of Betty’s Life will be held on Saturday, October 19, 2019 at 1:30 PM at the Belmond United Methodist Church, 1031 1st Street South East in Belmond, with Pastor Leila Blackburn officiating. Burial will be at the Belmond Cemetery, with a luncheon to follow at the church.

Visitation will be held on Friday, October 18, 2019 from 5:00 – 7:00 PM at Ewing Funeral Home, 111 Luick’s Lane South in Belmond and will continue one hour prior to services at the church on Saturday.

In lieu of flowers, donations may be made to the Belmond Methodist Church or to The Fisher Center for Alzheimer’s Research Foundation, 110 East 42nd Street, 16th Floor, New York, NY 10017 to support the search for a cure for all forms of dementia.

Betty Jane (Frye) McClenahan was born July 3, 1925, in Popejoy, Iowa, the third child of Ray E. and Berenice L. (Hilton) Frye. She grew up on the family farm and first attended a one-room schoolhouse in the country before graduating from the Dows High School in 1942 where she played basketball and the flute. She then graduated from the AIB College of Business in Des Moines, after which she worked as a secretary at the Iowa State House in Des Moines.

At a dance in Des Moines she met a young Navy man, Guy (Mac) McClenahan, who offered to buy her a drink but had to order her preference, an orange pop, when he realized how young she was. After he shipped out to England for the duration of the war, they continued their courtship by old-fashioned snail mail and were married on June 16, 1946, in Dows, Iowa.

During their 64 years in Belmond, she and Mac founded several agribusinesses including Mac’s Feeder Supply, and partnered with Betty’s father and brother in the Belmond Sales Pavilion. While Mac handled the daily operations, Betty maintained the administrative tasks and managed their home as a busy housewife. She was well known for her cooking and baking and passed her family favorites down to her children and grandchildren in the form of a cookbook created for them. She was especially proud of her children and was an ever present observer and supporter of all their activities. When grandchildren arrived, she was often ringside at their activities as well. Her typing skills came in handy in the pre-computer age when her children had to turn in long papers. And faithful to the end, she was a fan of the Minnesota Twins, being featured in a recent TV news special during her private tour of the Twins Stadium at Target Field.

Although she had grown up on a farm, she let Mac know they would be living in town. That fit better with her active life in civic groups, although she was sometimes drafted to bottle feed calves and was once seen chasing calves down Second Avenue when they escaped from a field near their home. She also was active in the CowBelles in support of their livestock business. Betty tended her gardens, was a faithful member of the Belmond Methodist Church and the United Methodist Women, and took her turn leading both Boy Scout and Camp Fire Girls troops. She treasured the friendships she made in her Craft Club, Progress Club, four bridge clubs, and golf outings. Just being around people gave her great joy. Leaving behind these connections was the hardest part of moving to Minnesota. Just days before she died, she told her daughter as they were admiring the beautiful weather, “I’d like to go golfing today. I think I could make a hole-in-one.”

Shortly after she and Mac moved to Minnesota, Mac passed away and Betty’s health began to deteriorate as she showed signs of increasing vascular dementia. That did not deter her from starting a bridge table at her first senior home or supervising the kitchen at Lake Manor. At the time of her death, she had determined that she no longer wanted to be confined to a wheelchair so she insisted on “graduating” from hospice and beginning physical therapy to walk again. She was making encouraging progress until sadly, on her last day of walking, her ankle gave way, causing her to fall forward and break bones in both legs. That still did not stop her. She had survived colon cancer, breast cancer (3 operations plus chemo), a car accident that left her in a halo for three months in Texas after an 18-wheeler plowed into their stopped car pushing the trunk into their back seat, and a different broken ankle. So she opted for the surgery to set her legs. Although the surgery was successful, her body was not able to recover this time and she passed peacefully on Saturday, October 12.

Her determination to live a full life despite setbacks will remain an inspiration to her family. The one loss that she never recovered from was the loss of her youngest son, Ed, to cancer in 2001. That changed their lives forever because they had to set aside their planned retirement and continue to manage their farms which had been intended to pass on to their son.